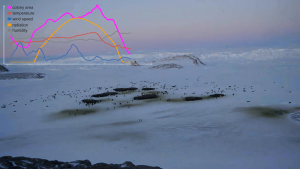 For Emperor penguins waddling around a warming Antarctic, diminishing sea ice means less fish to eat. How the diets of these tuxedoed birds will hold up in the face of climate change is a big question scientists are grappling with.

Researchers at the University of Erlangen-Nuremberg, the Centre Scientifique de Monaco and the Woods Hole Oceanographic Institution (WHOI) have developed a way to help determine the foraging success of Emperor penguins by using time-lapse video observations relayed to scientists thousands of miles away. The new remote sensing method is described in the May 2, 2018, issue of the Journal of Applied Physics.

“Global warming may be cutting in on food availability for Emperor penguins,” said Daniel Zitterbart, a scientist at Erlangen-Nuremberg and WHOI, and senior author of the study. “And if their diets change significantly, it could have implications on the health and longevity of these animals — which are already expected to be highly threatened or close to extinct by the end of this century. With this new approach, we now have a logistically viable way to determine the foraging success of these animals by taking images of their behavior once they return back to the colony from their foraging trips.”

Off all the penguin species, Emperor penguins tend to be the biggest eaters. And for good reason: they make exceptionally long treks on sea ice to reach their foraging grounds — sometimes up to 75 miles during the winter — and feed their large chicks when they return. But as sea ice diminishes, so does the microscopic plankton living underneath, which serves as the primary food source for fish that penguins eat. Sea ice also provides an important resting platform for the penguins in between foraging dives, so melting can make foraging that much harder.

Determining the species’ foraging success involves a two-step process. First, digital photos of the birds are taken every minute throughout the day using an inexpensive time-lapse camera perched above the colony 200 m away. The camera is rugged enough to withstand up to −50° Celsius temperatures and wind speeds above 150 kilometers per hour.

Céline Le Bohec, a research scientist in ecology from the Centre national de la recherche scientifique (CNRS) and the Centre Scientifique de Monaco, and co-author of the study, says this spying capability overcomes a major limitation in Antarctic field research: the ability to monitor conditions remotely.

“It’s really important to be able to understand how changing environmental conditions will impact penguin populations, but the harsh weather conditions and logistic difficulties linked to the remoteness of the white continent have made it very challenging to get information from over there,” she said. “Now, with our observatories, especially remotely-controlled ones, we can go online anytime and instantly see what is happening in the colony.

Moreover, due to their position at the upper level of the food web, working on top-predators such as Emperor penguins, is very useful for understanding and predicting the impact of global changes on the polar marine biome: it’s like having an alarm system on the health of these ecosystems.”

Images are recorded and stored in an image database and later correlated with sensor-based measurements of air temperature, relative humidity, solar radiation, and wind. The combined data sets enable Zitterbart and his team to calculate a “perceived penguin temperature” — the temperature that penguins are feeling. It is much like the wind chill factor for humans: the air temperature may be -12° Celsius, but other factors can make it feel colder.

“Early in the project, we thought if, for example, the wind was blowing faster than 15 meters per second, the penguins would always be huddling, regardless of the other environmental conditions,” said Sebastian Richter, a Ph.D. student in Zitterbart’s group and lead author of the study. “However, we did not find this to be true, and soon realized that we needed to account for the other weather conditions when assessing huddling behavior.”

By correlating the penguin’s “wind chill” temperature with video observations of when the penguins begin huddling, they’re able to come up with a “transition temperature” — the temperature at which colonies shift from a scattered, liquid-like state to a huddled, solid-like state. If the transition occurs at warmer temperatures, it means the penguins are feeling cold earlier and begin huddling to stay warm and conserve energy. And that indicates that the penguins had less body fat upon their return from foraging and were probably undernourished because they did not find enough food to eat within a reasonable distance from their breeding colony. If the transition temperature is lower later in the season, it suggests that the foraging season was a success and the animals returned well-fed and with higher amounts of body fat.

Zitterbart says the information may ultimately be used to derive conservation measures to protect Emperor penguins. According to a previous WHOI study, the species is critically endangered, and it’s projected that by 2100, the global population will have declined by 20% and some colonies might reduce by as much as 70% of the current number of breeding pairs of Emperor penguins if heat-trapping gas emissions continue to rise and Antarctic sea ice continues to retreat.

“With the information produced by our observatories, population modelling will help us to better project the fate of the different colonies that are left,” he said. “It’s important to know which colonies are going to be the first most affected by climate change, so if it appears that a certain colony will remain strong over the next century, conservation measures like marine protected areas can be established to better protect them.”