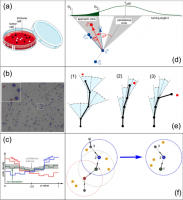 Chemotaxis enables cells to systematically approach distant targets that emit a diffusible guiding substance. However, the visual observation of an encounter between a cell and a target does not necessarily indicate the presence of a chemotactic approach mechanism, as even a blindly migrating cell can come across a target by chance. To distinguish between the chemotactic approach and blind migration, we present an objective method that is based on the analysis of time-lapse recorded cell migration trajectories: For each movement step of a cell relative to the position of a potential target, we compute a p value that quantifies the likelihood of the movement direction under the null-hypothesis of blind migration. The resulting distribution of p values, pooled over all recorded cell trajectories, is then compared to an ensemble of reference distributions in which the positions of targets are randomized. First, we validate our method with simulated data, demonstrating that it reliably detects the presence or absence of remote cell-cell interactions. In a second step, we apply the method to data from three-dimensional collagen gels, interspersed with highly migratory natural killer (NK) cells that were derived from two different human donors. We find for one of the donors an attractive interaction between the NK cells, pointing to a cooperative behavior of these immune cells. When adding nearly stationary K562 tumor cells to the system, we find a repulsive interaction between K562 and NK cells for one of the donors. By contrast, we find attractive interactions between NK cells and an IL-15-secreting variant of K562 tumor cells. We therefore speculate that NK cells find wild-type tumor cells only by chance, but are programmed to leave a target quickly after a close encounter. We provide a freely available Python implementation of our p value method that can serve as a general tool for detecting long-range interactions in collective systems of self-driven agents.