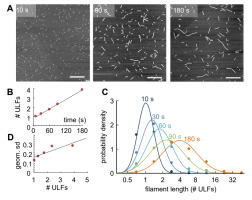 Vimentin is a highly charged intermediate filament protein that inherently forms extended dimeric coiled-coils, which serve as the basic building blocks of intermediate filaments. Under low ionic strength conditions, vimentin filaments dissociate into uniform tetrameric complexes of two anti-parallel oriented, halfstaggered coiled-coil dimers. By addition of salt, vimentin tetramers spontaneously reassemble into filaments in a timedependent process: i) lateral assembly of tetramers into unitlength filaments (ULFs); ii) longitudinal annealing of ULFs; iii) longitudinal assembly of filaments coupled with subsequent radial compaction. To independently determine the lateral and longitudinal assembly kinetics, we measure with a stopped-flow instrument the static light scattering signal at two different wavelengths (405 and 594 nm) with a temporal resolution of 3 ms, and analyze the signals based on Rayleigh-Gans theory. This theory considers that the intensity of the scattered light depends not only on the molecular weight of the scattering object but also on its shape. This shape-dependence is more pronounced at shorter wavelengths, allowing us to decompose the scattered light signal into its components arising from lateral and longitudinal filament assembly. We demonstrate that both the lateral and longitudinal filament assembly kinetics increase with salt concentration.