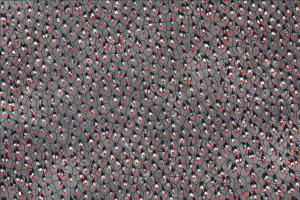 During breeding, king penguins do not build nests, however they show strong territorial behaviour and keep a pecking distance to neighbouring penguins. Penguin positions in breeding colonies are highly stable over weeks and appear regularly spaced, but thus far no quantitative analysis of the structural order inside a colony has been performed. In this study, we use the radial distribution function to analyse the spatial coordinates of penguin positions. Coordinates are obtained from aerial images of two colonies that were observed for several years. Our data demonstrate that the structural order in king penguin colonies resembles a 2D liquid of particles with a Lennard-Jones-type interaction potential. We verify this using a molecular dynamics simulation with thermally driven particles, whereby temperature corresponds to penguin movements, the energy well depth

and a normally distributed repulsive radius. To account for the observation that penguin positions are stable over the entire breeding period, we hypothesize that the liquid disorder is quenched during the colony formation process. Quenching requires the temperature to fall considerably below 1

, which corresponds to a glass transition, or the repulsion radius to exceed the distance between neighbouring penguins, which corresponds to a jamming transition. Video recordings of a breeding colony together with simulations suggest that quenching is achieved by a behavioural motility arrest akin to a glass transition. We suggest that a liquid disordered colony structure provides an ideal compromise between high density and high flexibility to respond to external disturbances that require a repositioning of penguins.

Press releases about this article: