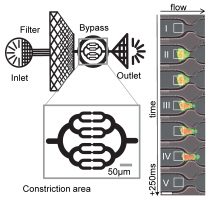 Many cell types in our body, such as fibroblasts, immune cells but also cancer cells, are able to actively migrate and squeeze through the tiny pores and cell layers in our tissue. Similarly, blood cells are passively pushed and squeezed through narrow capillaries. In both cases, the deformability or stiffness of the cells determines how much force or pressure is needed for such cell movements. Cell stiffness is therefore an important diagnostic marker.

In the current issue of Biophysical Journal, Janina Lange and colleagues set out to replicate the capillary bed and the tiny pores in tissue with a microfluidic chip. They monitored thousands of cells with a high-speed camera as they are flushed through this chip and get temporarily stuck at narrow constrictions. Cell stiffness can then be measured from the applied pressure, the cell deformation in the constriction, and the time it takes each cell to pass the constriction.

The researchers found that with higher “blood” pressure and with increasing constriction diameter, cells needed less time to squeeze through, but the effect was much smaller than they had expected. As it turned out, the cells became stiffer the more they were pushed and the more they were squeezed. This behavior is akin to a half-inflated football: when squeezed, it first appears floppy but eventually resists further deformation. Also, it becomes stiffer when inflated with higher pressure.

But unlike footballs, most cell types contain a large cell nucleus that – similar to a shopping net – is contained and held together by a filamentous network of lamin proteins. To measure the influence of these lamin proteins on cell stiffness, the researchers transfected the cells with a green fluorescent lamin construct and then monitored the fluorescence signal of each cell as it squeezed through the constrictions. They found that cell stiffness increased with brighter fluorescence and thus with higher lamin protein expression. This method opens the possibility to investigate the influence of numerous other proteins and signaling pathways on cell stiffness.