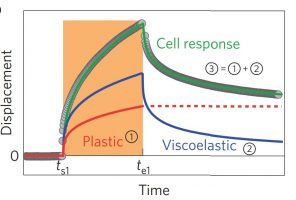 Human cells can be easily deformed — they stretch or become squashed under external pressure. The relationship between force and cell deformation changes in diseases such as cancer, lung disease and heart disease, as well as muscle disorders. To gain a better understanding of these diseases it is important to study the mechanical properties of cells.

Modern scientific models describe how cells change under the influence of external forces very precisely. However, how cells recover their shape after mechanical loading is still unclear. For example, how quickly do blood cells return to their original shape after being squeezed through narrow capillaries? What happens to the cells in our lungs that stretch when we yawn? And what about muscle cells that are overstretched in an accident?

Biophysicists at FAU, the Max Planck Institute for the Science of Light in Erlangen and the University of Arizona have now found the answers. When cells are subjected to external forces, they become deformed. This deformation has two dimensions: viscoelastic deformation, which is fully reversible once the force is removed, and plastic deformation, which can remain for a long time or even be permanent depending on the type of force and the length of time for which it is exerted. Flesh tunnels in ears are an example of the latter.

The team of researchers led by Prof. Dr. Ben Fabry, Dr. Navid Bonakdar and Richard Gerum was able to show that plastic cell deformation is caused by microscopic damage to the cytoskeleton, a network of fibre-like structures inside the cell that give it mechanical stability. Their results will help diseased cells to be characterised more exactly compared to healthy cells — which will enable a better understanding of cancer, lung diseases and heart diseases to be developed.