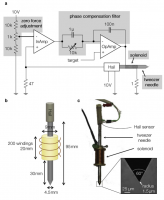 Magnetic tweezers based on a solenoid with an iron alloy core are widely used to apply large forces (∼100 nN) onto micron-sized (∼5 μm) superparamagnetic particles for mechanical manipulation or microrheological measurements at the cellular and molecular level. The precision of magnetic tweezers, however, is limited by the magnetic hysteresis of the core material, especially for time-varying force protocols. Here, we eliminate magnetic hysteresis by a feedback control of the magnetic induction, which we measure with a Hall sensor mounted to the distal end of the solenoid core. We find that the generated force depends on the induction according to a power-law relationship and on the bead-tip distance according to a stretched exponential relationship. Combined, they describe with only three parameters the induction-force-distance relationship, enabling accurate force calibration and force feedback. We apply our method to measure the force dependence of the viscoelastic and plastic properties of fibroblasts using a protocol with stepwise increasing and decreasing forces. We group the measured cells in a soft and a stiff cohort and find that softer cells show an increasing stiffness but decreasing plasticity with higher forces, indicating a pronounced stress stiffening of the cytoskeleton. By contrast, stiffer cells show no stress stiffening but an increasing plasticity with higher forces. These findings indicate profound differences between soft and stiff cells regarding their protection mechanisms against external mechanical stress. In summary, our method increases the precision, simplifies the handling, and extends the applicability of magnetic tweezers.