Influence of Environmental Conditions on the Huddling Behavior of Emperor Penguins 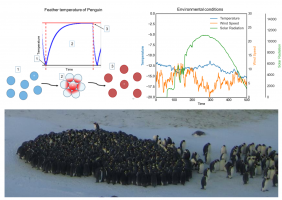 Emperor penguins (Aptenodytes forsteri) breed during the harsh Antarctic winter. During mating and breeding period (in total up to four months), the males must fast, while also incubating the egg during the latter. To survive and breed successfully, they must conserve their energy. Through evolution, the emperor penguins have developed several adaptations to their environment, which reduce energy expenditure. One of these strategies is the formation of tightly packed groups, called huddles. In these huddles the penguins are exposed to the body heat of their conspecifics can reduce their energy expenses up to 40 %.
The exact environmental conditions, which cause emperor penguins to form huddles, are still unknown. Also unknown is, what causes the variations in huddling duration and huddle size.
In this thesis, the number of huddles within a colony, the duration of the huddles and their size were evaluated based on time-lapsed image sequences. The emperor penguin colony near Dumont-d’Urville-Station (DDU) in Antarctica is shown in these images. Images of the mating period and the begin of incubation period 2012 and 2013 were used for the evaluation. Metrological data gathered at DDU Station consisting of temperature, wind speed, humidity and solar radiation, was used.
Huddling duration (the time between huddle formation and huddle break-up) and the maximum diameter were obtained for each huddle by visual image analysis. The environmental conditions during huddling were correlated with huddling duration and huddle diameter.
488 huddles could be observed over their whole duration. The number of huddles existing in parallel fluctuates. It was often as low as zero, but up to fourteen huddles could be observed simultaneously.
For the huddle diameter, the median stays nearly constant at around six meters. The median of the huddling duration varies between 30 minutes and one hour.
Huddling duration follows a gamma distribution. Shape and scale parameters of the distribution vary slightly between the years. I found a significant positive correlation between huddle diameter and huddling duration and observed that huddle frequency increases when temperatures drop below the median temperature measured during the corresponding month.
A linear correlation between environmental factors (temperature, wind speed, humidity and solar radiation), huddling duration and huddle diameter shows no consistent correlation. Only for huddle diameter and mean wind speed during the huddle a weak positive correlation could be observed. This correlation is consistent for all analyzed image data.
To further investigate the relationship between environmental factors, huddling duration and huddle size, I modelled huddle formation based on a stochastic process that is controlled by the feather temperature (the temperature measured under the back feathers of a penguin) of the individual penguins. Penguins start huddling, when the feather temperature drops below an individual lower critical value (between -7°C and -13 °C), and break a huddle, if their feather temperature exceeds an upper critical value (between 37.5°C and 37.9°C). The feather temperatures of the individual penguins were modeled using a first-order kinetic process that only depends on the temperature difference between air temperature and feather temperature and a time constant. This time constant depends on the penguin’s heat capacity and thermal resistance. The resulting time each individual penguin spends in a huddling state are exponentially distributed. The cumulation of these exponentially distributed individual huddling durations results in a gamma distribution, which agrees with the observed data. To get conformity for the shape and scale parameters of the gamma distribution, however, an additional random process is necessary. This process takes huddle break-ups into account, which are not caused by overheating (reaching the upper critical value). To recreate long huddling durations it is necessary, that not every overheated penguin breaks its huddle. We therefore included a process, where penguins leave the huddle without disturbing the other animals. This behavior has been observed to occur at the border of a huddle.
To recreate the huddle frequency per day (the number of huddles expected to occur), the probability of forming a new huddle cannot be constant over the day. It must be dependent on the number of huddles existing at that time. A high number of existing huddles leads to smaller probability of penguins forming a new huddle, as it is energetically more beneficial to join an existing (large) huddle.
This model is not yet able to explain huddling behavior overall. The maximum huddling duration is still too short and the distribution of the huddles over the course of the day is not correct.
By adding dependency of the huddling behavior on global solar radiation pauses, where no huddles have been observed during image analysis, can be explained.
A first test with wind speed added as influencing factor shows that this could further improve the model. The observed maximum huddling duration can be modeled with this.
Other functions, which may describe the influence of wind speed on the huddling behavior should be tested. Then, it should be possible to find an apparent temperature for emperor penguins and predict the behavior of the colony based on the past environmental conditions.