Mechanical and Electrical Characterization of Cardiac and Skeletal Muscle Microtissues 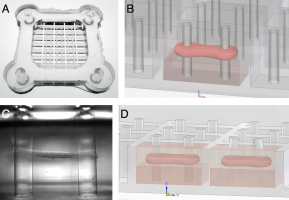 In-vitro engineered cardiac tissue grafts are of growing interest for diﬀerent applications such as substituting scarred myocardial tissue after infarction or chronic cardiomyopathies, or as a drug testing platform. Several studies have recently reported successful fabrication of microtissues from skeletal muscle cells, which are promising platforms for research on muscoloskeletal diseases in the future. Critical for the successful development of suitable models for engineered muscle grafts is the maturation into an in-vivo-like, highly aligned, and contractile tissue. Aim of this thesis was to develop a bioreactor system for investigation of the inﬂuences of mechanical and electrical conditioning on the maturation and contractility of engineered muscle microtissues. The approach presented in this thesis is a stretchable and electrically paceable system consisting of an array of 4x2x2mm microwells with two elastic pillars that serve as force sensors. Neonatal rat cardiomyocytes or C2C12 skeletal muscle cells mixed with a suitable extracellular matrix are added to the microwells and, after polymerization and compaction of the matrix, form an aligned tissue that spans between the pillars. Mechanical stretching with a linear stepper motor, electrical pacing with carbon electrodes, and microscopic imaging of the tissue are synchronized by a microcontroller, allowing us to study diﬀerent physiological and pathological forms of muscle contraction for various stimulation protocols. Cardiac tissues show remarkably uniform contraction induced by electrical pacing, which allows for imaging with a time resolution of up to 1000Hz through heterodyning. Accordingly, contractile performance can be evaluated with high temporal precision. Cardiac microtissues showed maximum muscle tensions of 1.92±0.21mN/mm2 as well as a continuous increase in active contraction force in response to muscle strain obeying the Frank-Starling mechanism. Passive forces of skeletal microtissues rose quasi-linearly by 70% up to a tissue strain of 10% and after that showed yielding eﬀects, potentially pointing towards structural damage. Generally, skeletal tissues showed way higher passive forces than cardiac ones (approximately 180µN compared to 40µN at 0% relative stretch), suggesting that more elastic energy is stored due to structural re-organization of the collagen lattice. Finally, long-term stimulation through electrical pacing, mechanical stretching, or a synchronized combined protocol of cardiac microtissues revealed pronounced mechanical responsiveness in a form, which partly diﬀers from published observations: while 24 hours of electrical ﬁeld stimulation showed no signiﬁcant eﬀect on contractile force, cyclic mechanical stretch reduced it by 70%. Combined stretching and pacing synchronized in a way that mimics the cardiac cycle of a human heart rescued contractile performance signiﬁcantly but not fully. Published data by other groups observed a more profound increase in contractile force. These diﬀerences may be attributable to longer stimulation times of 5–14 days as compared to overnight stimulation in our tissues. Taken together, the described bioreactor system provides a platform for studying mechanical properties and maturation of engineered microtissues. Adapting the system to cell sources from mice, human, or even neuronal cells oﬀers a perspective for regenerative tissue engineering, drug testing, and exploring fundamental aspects of mechanobiology in the future.